I read something interesting yesterday in the Wall Street Journal.  Turns out that states are facing a $1 trillion gap between the money they have promised pensioners and the money they have set aside to pay them.  That does not count the massive investment losses they faced in the second half of 2008, from which they have not recovered.

Did I say “interesting?”  Let’s try “criminal.”  I, for one, have not believed states would be able to pay pensions for some time now.  Some third-grade math was all it took.  The zeros were a little hard to manage until I saw this neat little analogy on the national debt clock web site.  If you were to spend a dollar a second, it would take 12 days to spend a million dollars.  Now, how much time would it take to spend a trillion?  (I’ll wait for you while you calculate this.) 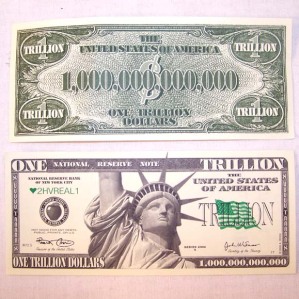 Back?  OK.  The first thing you found out was that your calculator does not work with that many digits.  If you are math-compulsive, you got out a piece of paper and started to work.  If not, you waited for my answer: 32,000.

In other words, don’t wait for that gap to be filled.  Ain’t gonna happen.  Here’s why.  If states start to go bankrupt, something that was unthinkable until now, the money obviously will not be there.  But the Feds!  They can save us!  After all, they can always honor their obligations–by printing more money.  There, my friends, is the real problem and a good reason to be worried about your retirement even if you are not a public employee.

Historically, printing more money has been the favored solution of governments when things go bad.  They say they won’t do that, but in the end they always do.  From Ancient Athens to Zimbabwe in 2008, the result is always the same–a swift and ugly currency crash wherein money becomes worthless overnight.  Zimbabwe’s inflation rate reached 98%…PER DAY.  That means it took slightly over 24 hours for prices to double.

There is only one solution at the national level, and that is for politicians to face up to the fact that they have promised way more than they can deliver and cut expenditures.  Whew, that was a good one.  I crack myself up every time I say it.

There are some things we can do, however.  It is sometimes said that the best attitude when going into battle is to pretend that you are already dead.  Do what I do and pretend that your retirement is already dead.  Figure out how to retire without it.  One person I heard of recently bought two haircut franchises even though she is years away from retirement.  Why?  Because people will probably buy haircuts even when they can’t afford luxuries.  And inflation?  Well, if we experience true hyperinflation, all bets are off, but she still stands a better chance than most because her prices will rise accordingly.  If none of this comes to pass, so much the better.  She will have her company retirement and her franchise income.

Learn to make money in a side business or invest in things that stand at least some chance of surviving the coming earthquake.  If you think the politicians will save you, I have a business deal I’d like to discuss with you…

Terry is constantly amazed at how little people learn from history.  He is also amazed at what he saw in New Orleans in 1976, but that’s another story.